The Department of Justice - National Prosecution Service and the Hanns Seidel Foundation share a common interest to see and learn how cooperation and information exchange amongst police investigators and prosecutors may be strengthened, and over a series of moderated dialogue sessions may lead to successful filing and prosecution of cases.

Since its launch in Cagayan de Oro City in 2017, a series of dialogue activities between prosecutors from the cities and provinces comprising Northern Mindanao and their counterpart police investigators from the Police Regional Office No. 10 have been conducted.  To date, twenty-two have been held with participants from the five provinces of the region, including highly urbanised cities.

Conduct of the Activities 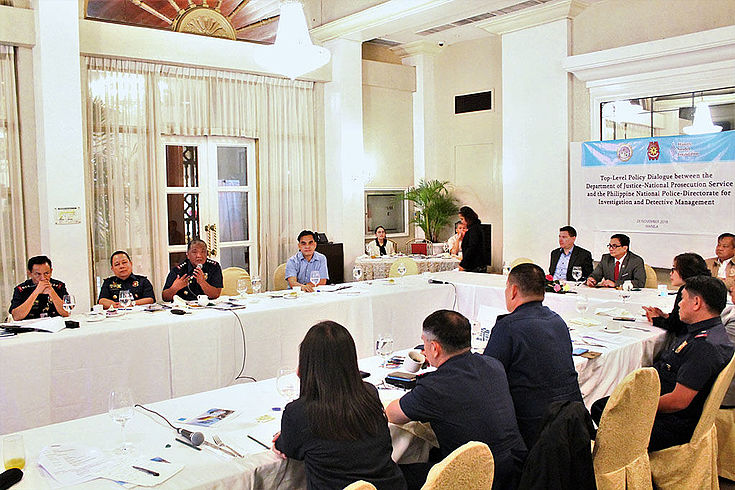 Dialogue activities are conducted in an informal, relaxed environment to help encourage open and reciprocal sharing and exchange of experiences and ideas, challenges and solutions towards improving the cooperation and information exchanges amongst prosecutors and police investigators with the end in view of achieving a higher incidence of successful prosecution and convictions.

Initial areas of major interest included, amongst others:

•       Police Operational Procedures as these relate to conduct of arrests and custodial investigation, and scene of the crime investigation;

•       Record of arrests and eventual filing of cases;

•       Discussion of cases where the cases filed were dismissed, or the accused was acquitted as a result of technicalities in the conduct of arrest, investigations or the evidence presented;

Progression of the Dialogue Activities

Initially, the objectives of the dialogue centred on changing the perception of the prosecutors and the police investigators into regarding each other as belonging to the same team.  The activities sought to open up communication channels between the prosecutors and the police investigators so as to help deepen their understanding of one another’s work and the role each has in the prosecution-and-law-enforcement as a whole.  The activities were also meant to provide the participants with the opportunity to exchange information and increase their level of co-operation with one another, so as to strengthen the linkage between the two of the five pillars of the Philippine criminal justice system, i.e. the Prosecution and Law Enforcement.

As the series of activities progressed, the realisation of prosecutors and police investigators that they are in one team working towards a common goal – the successful prosecution of cases – emerged and they acknowledged that communication channels between prosecutors and police investigators may need to be further strengthened.  From thereon, the objectives also evolved. 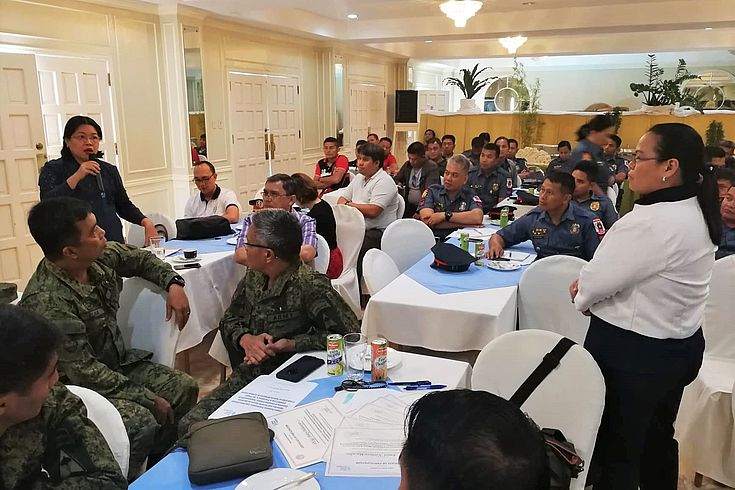 The sharing during the dialogue activities deepened and began to focus more on the identification of procedural, information and communication gaps in order to strengthen linkages between prosecutors and police investigators.  At the same time, areas, issues and problems encountered during police investigation that affect prosecution of cases and that therefore needed to be addressed, were identified.  More importantly, the participants openly discussed about working together to correct those gaps, and problem areas identified.

In some provinces, such as Misamis Oriental and Bukidnon, the dialogue has taken on a thematic approach after the first activities.  Both provinces recognise the importance of tackling pressing issues and concentrated on major crimes such as prohibited drugs.  In Bukidnon, other critical criminal issues were also taken up, such as crimes against women and children as well as land disputes and land conflicts.  For these activities, government line agencies were also invited to attend through their regional or local representatives.

With the continued conduct of the dialogue activities,  the prosecutors and the police investigators have increasingly become even more engaged and proactive, such that they offers ways to help resolve issues during the dialogue activities and discuss ways work out challenges and problems.  Future sessions will be adapted to the needs of the prosecutors and police participants and help both to eventually become even more response and proactive pillars of the justice system in the country.

Long-term Relevance of the Dialogue Activities

The results of the dialogue sessions will be synthesized and provided to the Head of the National Prosecution Service (NPS) and the Chief of the Philippine National Police.  The HSF continues to work with the NPS in improving the capabilities of its prosecutorial support staff and will use the findings as input to training of entry-level prosecutors and staff dedicated to assisting in the preparation and filing of cases.