Sharing perspectives and seeking to understand issues surrounding journalism, experts analysed the evolving landscape of the trade in the Philippines. Views from international as well as from local standpoints were exchanged and answers to pressing questions offered. Streamed live online, the activity was organised by the Philippine Press Institute with support from the Hanns Seidel Foundation. 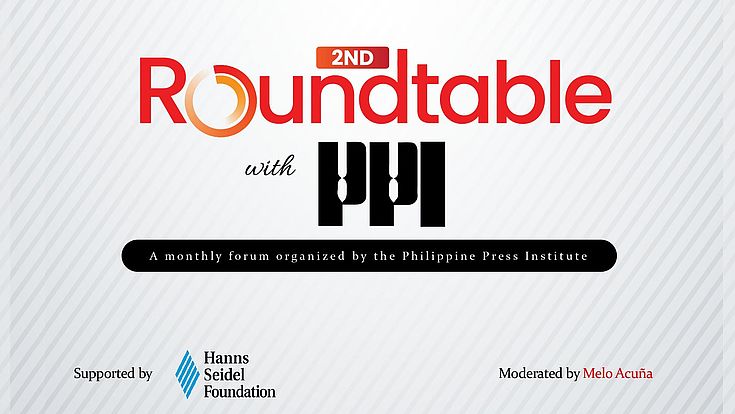 What is journalism’s biggest challenge now?  Experts on labour, law and media deliberated the concerns and struggles journalists are beset with in a roundtable discussion held online on 19 August 2020.  The discourse delved into press freedom and threats wrought by the ever-changing environment and prevailing circumstances that journalists have to be on guard for in order to help protect themselves and their legal freedoms.  Opportunities emerging alongside were also considered.  In addition to the twenty logged-in participants, the activity enjoyed a live-online viewership of 339.

“Media and journalists are an essential source of information for all of us, which also means they have a huge responsibility to fair, objective and well-informed reporting as well as proper research and analysis,” Embassy of the Federal Republic of Germany Ambassador Anke Reiffenstuel’s remarks established the focus of the panel discussion in her message.  “All this can only be done properly if press freedom is being granted.”  As media workers endeavour to deliver reliable and timely information to the public, the overall environment has to be able to support them in their fulfillment of this duty.

Providing insights from specific angles, the speakers, who comprised policymakers, both from an international organisation and from the Philippine government, as well as journalists, described the reality that media workers are dealing with in the field.  As front liners, media workers are exposed to perils that come with their profession.  While striving to obtain factual information and to present these in an objective manner, they are confronted with dilemmas concerning their health, livelihood, safety and security.  Deemed to have been prevailing for decades, this situation was said to have been exacerbated by the ongoing pandemic. 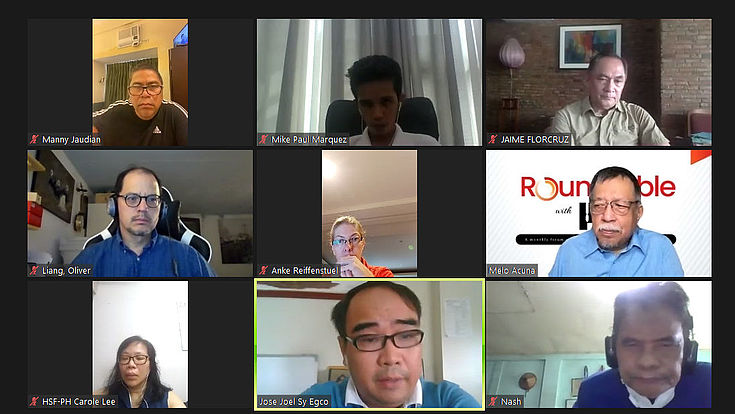 On one end, Reporters sans frontières (RFS) data since 2009 was used as a reference in concluding how the Philippines has managed to rank better in recent years in terms of press freedom.  On the other, it was pointed out how the past few months have witnessed the closing of news outlets, with some ending their print run and moving to online channels, where possible, and others, laying off journalists.  Concern over the threat this poses to the survival of reliable sources of news was voiced.  Meanwhile, doubt was cast on the transparency of state-owned news sources; privatisation of media, on the other hand, came bundled with the question of objectivity.  This scenario is said to be rendering news outlets and media workers vulnerable to various forms of social injustices as they struggle to survive with limited resources in the face an uncertain economic future.

The pros and cons of the rapidly developing online mediascape were duly taken in to consideration.  While it is credited with creating opportunities, serving as an “extra platform,” giving a “voice” to those who would otherwise have none, providing wider reach and increasing connectivity, these come, as mentioned, at the cost of the possible proliferation of unvetted news, cyberbullying and cybercrime, amongst others.  The need for laws that adopt to the ever-changing environment in order to help enable quality journalism to thrive was highlighted.

Press freedom is enshrined in the Philippine Constitution of 1987 under Bill of Rights in Article III, Section 4, which states: “No law shall be passed abridging the freedom of speech, of expression, or of the press, or the right of the people peaceably to assemble and petition the government for redress of grievances.”   The practice of journalism rests on these constitutional guarantees.  These are reinforced by Administrative Order No. 01 signed by President Rodrigo Roa Duterte on 11 October 2016, “creating the presidential task force on violations of the right to life, liberty and security of the members of the media.”

Likewise, freedom of information is protected in Philippine fundamental law (Sec. 7, Art. III, 1987 Constitution) where it refers to the right of the people to information on matters of public concern.  In support thereof, President Duterte signed on July 23, 2016 Executive Order No. 2 which implemented the Freedom of Information Program in the executive branch.

It was confirmed that as of the time of the round table discussion, the government was working on the passage of the proposed Freedom of Information Law and the Media Workers' Welfare Bill, which is to provide “enhanced protection, security, and benefits for media workers.”   Nevertheless, the experts’ insights revealed that an environment where quality journalism can flourish comprises more than the laws that guarantee and protect the freedoms granted media workers.  Each of the different parties concerned have to take an active part in creating such an environment and in maintaining it.

Attention was drawn to the importance of conducting social dialogue amongst government, media organisations, and the media workers to discuss problems and adopt preventive measures that can help avert issues in the work place, including violence and unjust labour practices.  Journalists were reminded to remain bound to principles of the trade in their work, promote media literacy by helping to educate the public and assume responsibility for what they write in the news.  Media organisations are to be held accountable for the welfare of their employees.  Altogether, these create an atmosphere favourable for media viability.

This activity is the second one in a series of six “Roundtable with PPI,” an online forum streamed live on the PPI’s Facebook page.  Scheduled to be held on the third Wednesday of every month until December 2020, it is organised by the PPI with the support of the Hanns Seidel Foundation.  The next activity is planned for 16 September 2020. 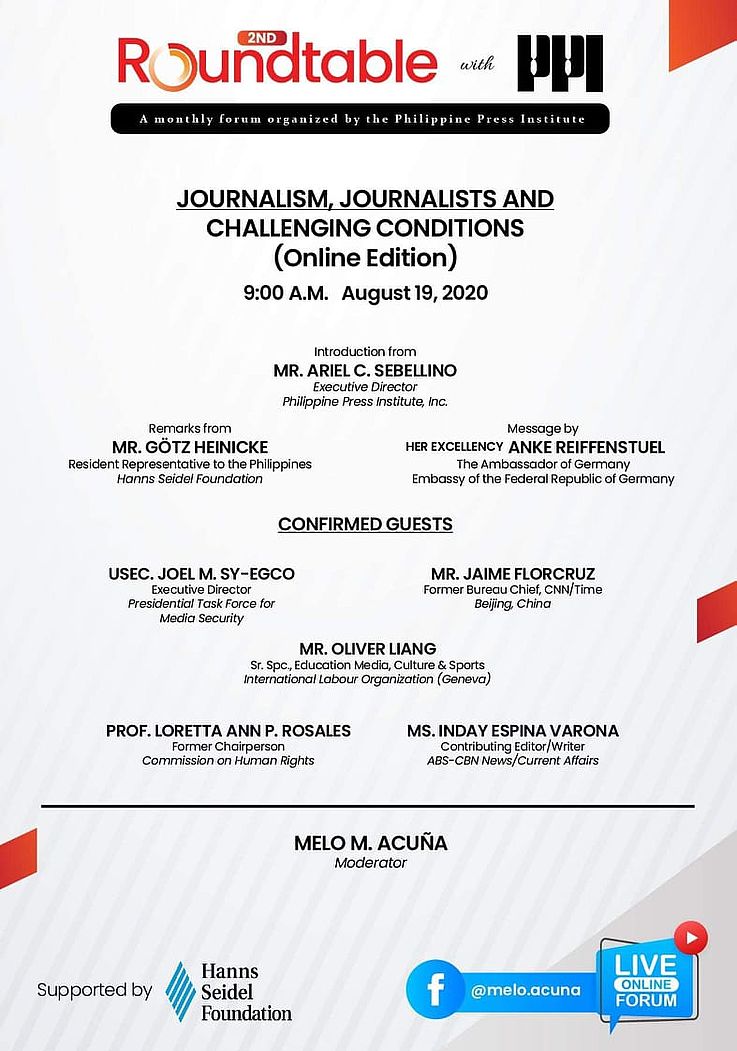 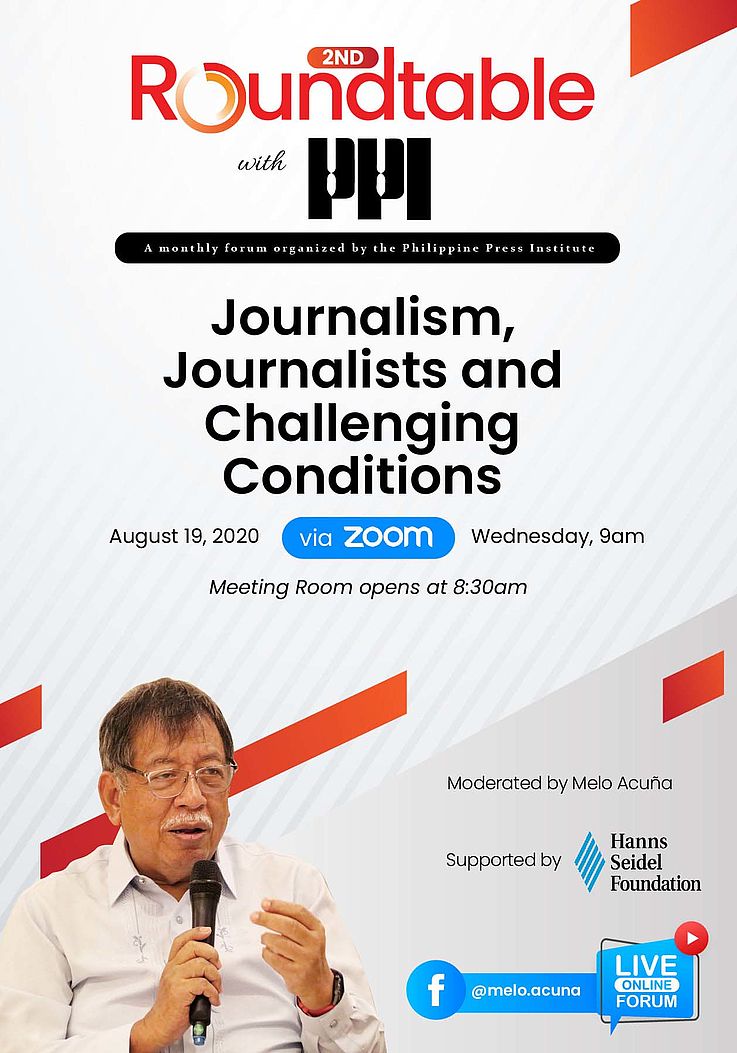