Media practitioners delve into the Anti-Terrorism Act of 2020 in an online discussion with representatives from law enforcement, special interest groups, film, and academia to exchange perspectives and undertake a more in-depth analysis of the new law. Streamed live, this activity was organised by the Philippine Press Institute with support from the Hanns Seidel Foundation. 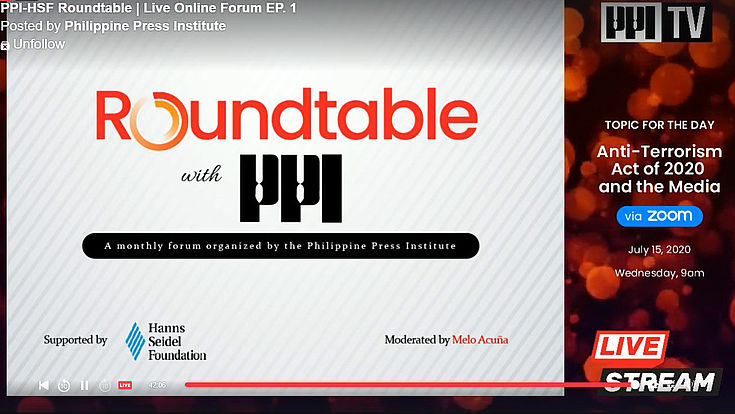 Why are media practitioners discussing the Anti-Terrorism Act of 2020?  The Philippine Press Institute (PPI) organised a round-table discussion (RTD) to probe deeper into Republic Act No. 11475 (R.A. 11475) and know what media practitioners are saying about it.  Held online on 15 July 2020 and streamed live, the forum made available to the public a discourse on the new legislation amongst the guest speakers representing their respective agencies and organisations. During the activity, there were more than five hundred online viewers and twenty-eight logged-in participants.

“The media has a critical role in this regard since they are front liners when it comes to critical observation, balanced and objective reporting, and accompanying the situation we find here on the ground,” Ambassador Anke Reiffenstuel of the Embassy of the Federal Republic of Germany set the tone for the RTD in her message.  She articulated hope for the opportunity to have a continued dialogue.

Amongst the speakers were journalists, representatives of media organisations, law enforcement, special interest groups, film, and academia.  Each voiced his or her analysis of the legislation.  Being a lawyer, one of them spoke of his observations from a legal standpoint.  Together, these reflections provided a better understanding of the speakers’ individual perspectives, leading to a closer examination of certain provisions and of the language in the law that draw more questions, mainly from media practitioners, than others do.

The points raised included “loose labelling of a person as a ‘terrorist’,” “broad use of the term ‘terrorism’,” possible “red-tagging” or labelling of a person or organisation as “communist,” warrantless arrest, detention and incarceration, the prospect that the law may be “weaponised,” and, how the law has “certain clauses that can easily be turned against media practitioners.”  Even as the government was assumed to have enacted the law to “stave off terrorism from the external environment,” R.A. 11475 was noted to embody provisions that contradict with those of the Constitution. 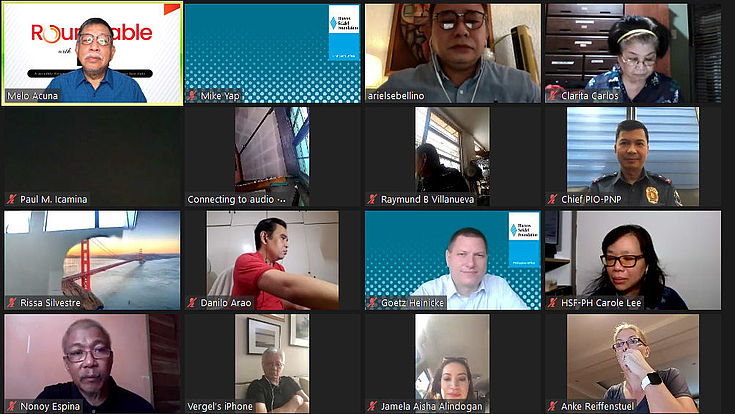 These observations prompted questions about the enforcement of the law, its proper implementation along with the integration of the protection of human rights, and the system of oversight.  It also raised the expectations for professionalism in the police, for the government to review how it plans to implement the law, and how it should be “open to adjustments of its implementation.”

In response, Philippine National Police Spokesperson, Brigadier General Bernard M. Banac stated that the police will be guided by the implementing rules and regulations (IRR) in the enforcement of the law, affirmed that the police are after the safety and protection of the people against the threat of terrorism, and welcomed comments and criticisms on the law.  Meanwhile, he cited the need for R.A. 11475 so as to “empower the police to respond to these developing threats [in the fight] against terrorism.”

The exchange of insights amongst the speakers during this RTD shed light on their viewpoints and the context in which their apprehensions arose.  Ultimately, with the passing of said law, the role of journalists in our society is said to be even more vital.  Having verbalised their collective desire to continue accomplishing their jobs, media practitioners will thusly remain watchful observers while expecting the continued protection of their freedom of the press and freedom of expression.

PPI Executive Director Ariel Sebellino maintained that, “It [PPI] will always be consistent with its mandate: that is the protection of press freedom.”  Expressing the Hanns Seidel Foundation’s support for the activity, its Resident Representative Götz Heinicke remarked, “Well-informed journalists are essential and are key players for democratic and peaceful development.”

The Anti-Terrorism Act of 2020, which repeals Human Security Act of 2007, was signed by President Rodrigo R. Duterte on 03 July 2020.  Eight petitions have since been filed by different special interest groups of lawyers and of educators, and by labour groups, before the Supreme Court seeking to nullify the law, which takes effect on 18 July 2020.  Created by virtue of the law itself, the Anti-Terrorism Council has ninety days from the law’s date of effectivity to review it, draft its IRR and submit this to Congress.  The law can only be enforced once the IRR has been approved by Congress.

“Roundtable with PPI” is a monthly online forum streamed live on the Facebook page of the PPI.  Scheduled to be held until December 2020, it is organised by the PPI with support from the Hanns Seidel Foundation.  The next activity is planned for 19 August 2020. 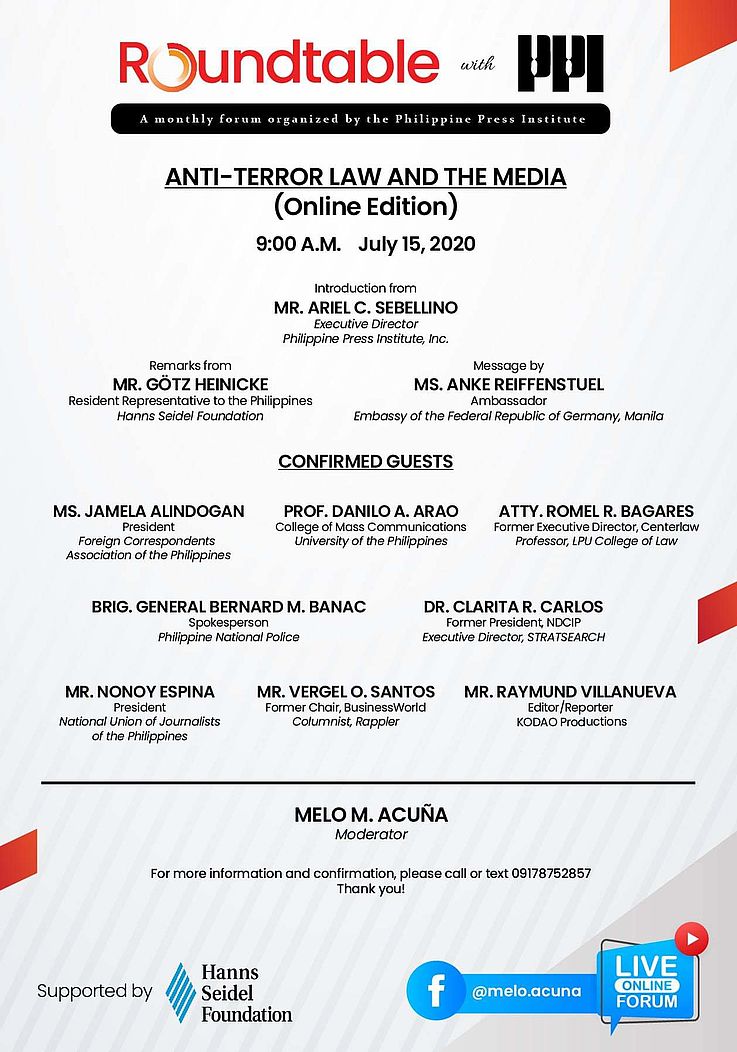 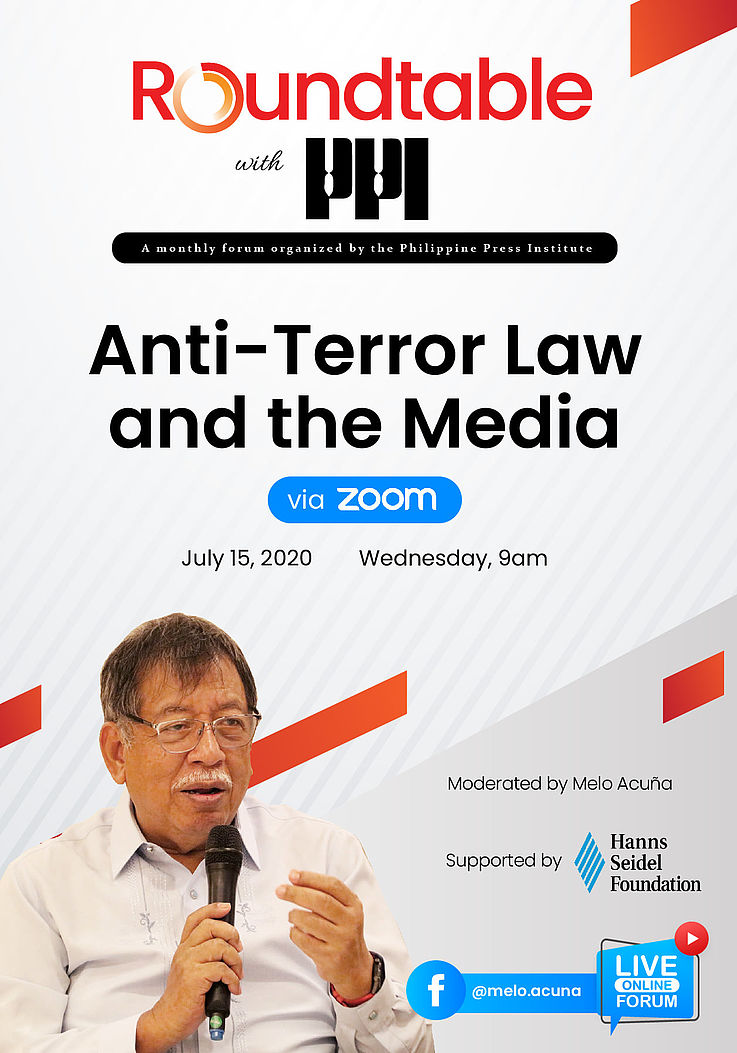