Newly-created local media councils in the cities of Batangas, Iloilo and Davao gather for an online launch organised by the Philippine Press Institute (PPI). A forum focused on the concept, objectives and measures of success of media-citizens councils complemented the activity. The launch and forum topped off around a month’s efforts by community journalists to set up said councils. 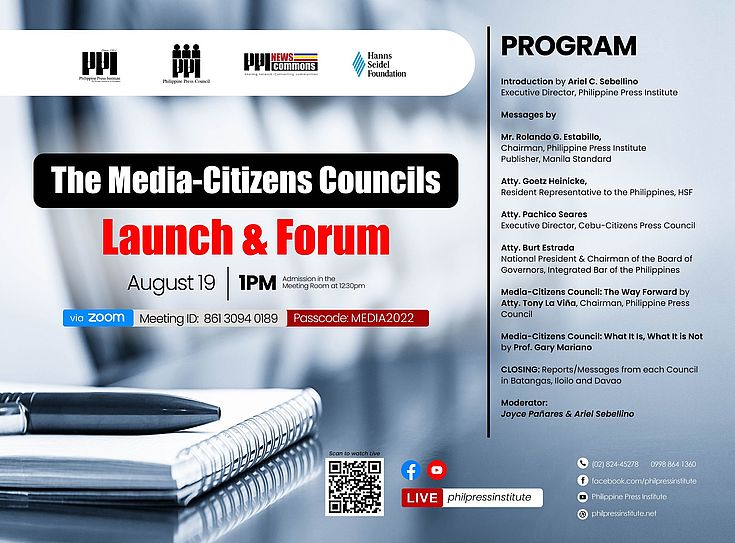 What is the significance of setting up a local media council?  As a result of preceding online and hybrid seminars, meetings and consultations, three local councils have been created.  “What this implies is hope and optimism for local self-regulation and the promotion of quality journalism to better safeguard media freedom and accountability and the public right to reply and to free, truthful and timely information.”  PPI’s Chairman, Rolando G. Estabillo’s words in his opening message in said online activity “The Media-Citizens Councils: Launch & Forum” held 19 August 2022 provided a clear perspective of the milestone and accompanying expectations.

After retracing the history of press councils in the Philippines, the speakers revisited the objectives of a media council to set expectations, reinforce commitments and identify perspectives.  The discussion highlighted the importance of media councils’ role in helping to preserve press freedom and in maintaining and improving journalism standards in the community and, more broadly, in the country.  It pointed out their role in serving as deterrents to external influences and as alternatives to litigation.  It also underlined the responsibility and accountability of a press council as a body that balances between ensuring press freedom while preventing its misuse.

The first press council in the Philippines was created by virtue of Republic Act No. 4363 enacted on 19 June 1965.  It was said to have been abolished with the proclamation of Martial Law in 1972.  The Philippine Press Council was eventually revived and formally founded in 1993 by the PPI.  Since then, other press councils have come into existence, such as the Cebu Citizens-Press Council and the Kordilyera Media-Citizen Council.

Earlier this 2022, the PPI organized three online regional seminars for the island groups of Luzon (24 February), Visayas (11 April) and Mindanao (27 April) on, “Media Accountability and the Press Council” for its members in said areas.  These seminars were intended for the discussion of why there is a need for a local media council as a means for accountability and self-regulation, an exchange with two existing councils of experiences and suggested means of sustainability.

These were followed by hybrid activities for each island group that were held in the cities of Batangas (8-9 June), Iloilo (15-16 June) and Davao (28-29 June), respectively, and attended by members of the academic, the business and the legal sectors, aside from members of the PPI.  They served as gatherings for the prospective members of the local councils proposed to be established to consult with one another and to discuss matters related to the creation and sustainability of the councils.

The creation of the three local councils were observed as a sign of growing enthusiasm and commitment amongst community journalists and media outfits in setting up a self-regulatory body, which is willing to assume responsibility and accountability of the local media and to respond to their communities.  With the participation in the newly-formed councils of both media persons and non-media stakeholders, such as members of academic institutions, local chapters of the Integrated Bar of the Philippines, business chambers and civil society groups, the councils felt that the local media would now be better empowered to get their voices heard.  Being thus inclusive, they also deem themselves to be in a better position to engage the public and have a better chance at sustainability.

The PPI welcomed the realisation of what it referred to as a long-overdue plan and expressed support for the establishment of further local councils.  Once all three local councils have completed their sets of officers, oath-taking will proceed followed by their adoption of a Code of Ethics.

This launch with forum is a culmination of the online and hybrid meetings, as well as the meetings and consultations held at the local levels, towards the formation of the three local media-citizens councils.  This now brings the total number of local media councils in the country to six, as pointed out by one of the speakers.  Streamed live online, the activity was organised by the PPI with support from the Hanns Seidel Foundation (HSF) as part of their project cooperation on civic journalism.