After more than two years since participating in the Nachkontaktkonferenz 2017 held in Bavaria, Germany, the former scholars welcomed the opportunity to meet again to maintain connections, rekindle old ties, and discuss and exchange experiences, ideas and new initiatives. 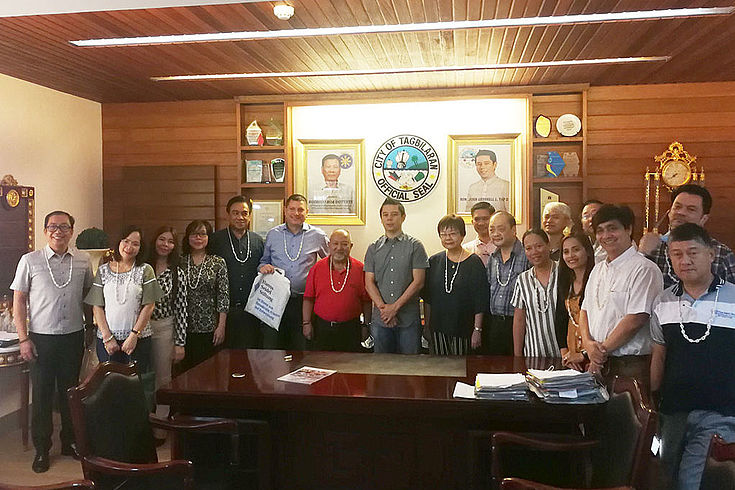 The conference kicked off with a courtesy call on Mayor John Geesnell L. Yap II of the City of Tagbilaran.  During the meeting, Mr. Götz Heinicke, Resident Representative of the HSF in the Philippines gave a brief backgrounder on the Foundation and its projects and programs in the country, including its Scholarship Program.  Mr. Honorio M. Grupo, Jr., President of the former scholars’ club, provided a general introduction of the group and its projects.

Mayor “Baba” Yap welcomed the information about the Foundation’s Scholarship Program and expressed excitement to introduce it to his constituencies.  He also voiced his gratitude for the support received by Boholano-beneficiaries of the Dualtech Training Center (DTC).  In his brief exchange with DTC’s president, Mr. Arnolfo Morfe, who himself is a former HSF scholar, Mayor Yap confirmed the city’s interest in identifying more Boholanos to join the DTC’s training programs.  Thereafter, the former scholars visited the office of Vice Mayor Jose Antonio S. Veloso.

To promote the HSF’s Scholarship Program and increase the awareness of the Boholanos about the possibility of pursuing further studies in Germany with the support from the HSF, the group met with Mr. James Emmanuel Tabigue, Head of the Scholarship and Employment Facilitation Office the University of Bohol (UB) along with four of its key officers.  Mr. Heinicke presented the HSF’s Scholarship Program while the former scholars shared their experiences and insights with the university officers.  The keen interest of the UB officers in introducing the program to their students made for a dynamic discussion and exchange during the meeting.  Located in a city, which is home to some 250,000 inhabitants, the UB is a 74-year-old co-educational higher education institution with a student population of more than 8,500. 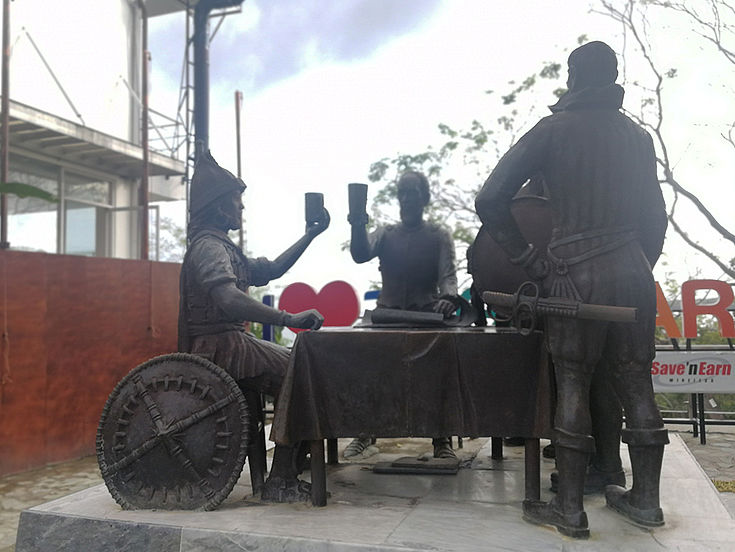 The historical site of the Blood Compact

Looking back into the History

A native Boholano, Mr. Honorio M. Grupo, Jr., brought the group to key areas of Bohol to learn more about the island’s history and heritage.  The historical site of the Blood Compact or the Sandugo (a Visayan word which means "one blood") provided the members with a significant look back into history.  During their visit, the group was reminded of the symbolic manner by which Datu Sikatuna the chieftain of Bohol and the Spanish explorer Miguel López de Legazpi met on March 16, 1565 and sealed their friendship as part of the tribal tradition.

The group took time to participate in Mass at the oldest church in the City of Tagbilaran, La Purisima Concepcion de la Virgen Maria Parish Church, which is a Roman Catholic Church and more commonly known as Baclayon Church.

Another highlight was the visit to the museum of the Philippine National Artist, Napoleon “Billy” V. Abueva, who is recognised as the “Father of Modern Philippine Sculpture.”  Along the way, the group dropped by Honorio Grupo Street, which was named after Mr. Grupo’s late father who served as Municipal Mayor of the City of Tagbilaran from 02 September 1946 to December 1947.

Charting future directions and setting the path for planned activities

As a way to warm up the discussions and exchanges amongst the members of the group, a video showing the members of the group giving self-introductions during the visit of Prof. Ursula Männle during her official visit to the Philippines in August 2019 was shown.  This called to mind the training and education the former scholars completed in Germany and what they have achieved in their lives hence. 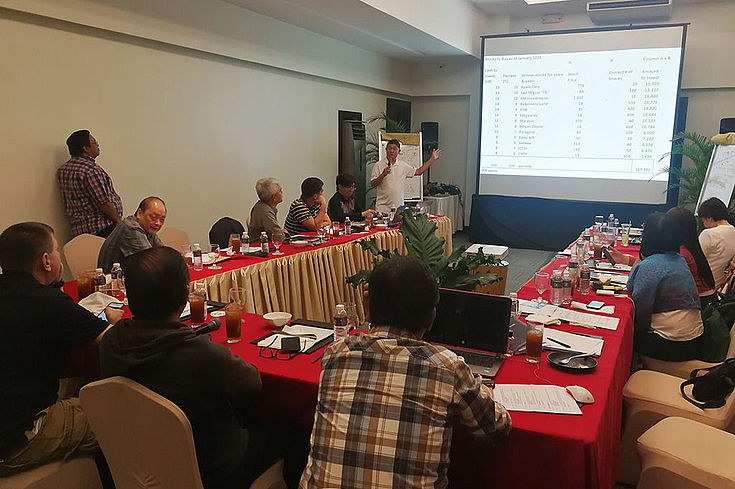 Harnessing the strengths of the group, the members of which hail from different backgrounds and possess specializations in various fields of expertise, a strategic planning session was conducted to assess their progress and to chart future directions.

Started off by Mr. Grupo, the session was steered by Mr. Gabriel O. Orendain, one of the group’s former presidents, who guided the group through an analysis of the strong and the unique qualities of the group and of its members. This was followed by a critical look at those areas they saw the need for improvement and where the members saw themselves to be at a disadvantage.

The members were deeply involved in the discussions and exchange and the answers they provided were used to plot the short- and long-term goals of the group.  These were meant to serve as bases for setting a path for the activities to be conducted that can bring the group nearer to its ultimate goal and achieve its objective.  In the interest of time, the continuation and finalization of this session was agreed upon to be accommodated during the next meeting.

Mr. Heinicke took the opportunity to present to the former scholars the Foundation’s programs and project activities for 2020 - 2022 funded by the German Federal Ministry of Economic Cooperation and Development.

As a tribute to the Deputy Head of Scholarship Department of the Hanns Seidel Foundation, the former scholars compiled videos of personal messages from the members and from the HSF-Philippine Office in a video-collage.  This was to be presented to Dr. Michael Czepalla, who is set to retire from the Foundation in June 2020, as an expression of gratitude and a way of conveying the members’ good wishes to him in the next phase of his life.

The conference concluded with the expectations of the former scholars’ group as part of the activity, and these centred, generally, on the continued active participation of the members in the planned activities of the group.  The majority recommended the regular conduct of activities as a way of keeping the members involved in the group.

The three-day activity was organised by the Hanns Seidel Foundation's former scholars, with the support of the Foundation. The next gathering is scheduled for March 2020.