Spearheaded by the Project Steering Committee (PSC) led by the Commission on Human Rights (CHR) and the Alternative Law Groups (ALG), a CBD National Conference was held last December 15, 2021 which gathered over 70 participants online from various regions of the country. The activity was the culmination of the island-wide conferences conducted for Luzon, Visayas and Mindanao organized by the CHR. 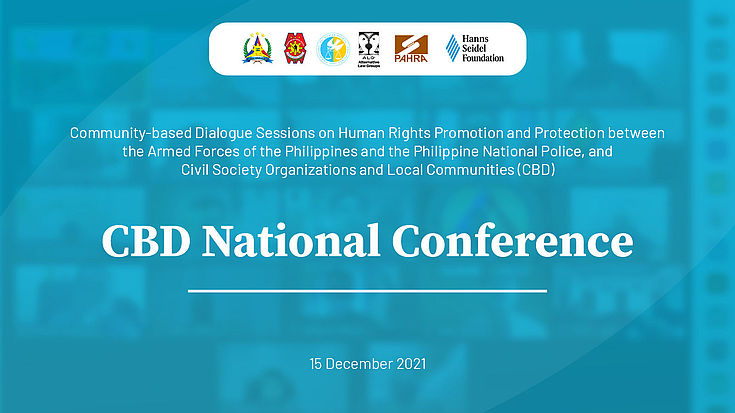 The National Conference served as avenue to share experiences, successes, best practices, lessons learned, challenges and recommendations from the different regions.  It was also a good opportunity to know the partners and stakeholders working at the local level, and learn from each other on ways forward towards institutionalizing the CBD mechanism.  In particular, the members of the PSC were pleased to hear the reports coming directly from the partners on the ground.

As a long-time partner of the CBD project since its inception in 2008, Mr. Goetz Heinicke, Resident Representative of the Hanns Seidel Foundation/Germany (HSF), acknowledged the participants for their time and effort in joining the virtual conference.  He noted the importance of the CBD as a means to discuss and resolve human rights-related disputes peacefully and amicably.

Delivering the Keynote Address was CHR Commissioner Karen Gomez-Dumpit. She briefly recalled the beginnings of the CBD project including its goal of contributing to improvement of the human rights situation in the country through the enhancement of relationships between duty-bearers and rights-holders working hand in hand to promote human rights.  She underscored the project’s simple concept of being able to come together for genuine dialogue and being able to converse with one another to find ways and means to address human rights issues.  Commissioner Karen reiterated CHR’s commitment to an open dialogue, not to say that it is confrontational but “hard talk” and also action-oriented focusing on community-based cooperation efforts. She cited the results of the project for the past 13 years evolving from the conduct of regional CBDs, into collectively developing training handbooks, giving focused trainings on civil and political rights as well as on economic, social and cultural rights, and the conduct of top-level policy dialogues to discuss policy recommendations.

She noted another fruitful result of the project in that CHR regional offices are able to provide sound policy recommendations based on the issues being surfaced from the CBDs conducted, which are adopted by the central office as well.  She added that issues and concerns are incorporated in position papers and advisories which are presented to stakeholders, adding that through the years, all these have fostered concrete policy changes towards improvement of the human rights situation not only at the regional level but also at the local community level.

Commissioner Karen stated that despite the challenges, everyone should remain optimistic and hope to experience the rewards of coming together.  She stressed that even if we agree to disagree, it is better to engage in dialogue than not communicating at all as it is a process.  She reminded everyone that as a democratic country, two of the basic tenets of a healthy democracy are open dialogue and transparency, which is the reason why it is worth believing in the power of dialogue apart from it being a civilized and most effective conflict- and issue-resolution process as proven time immemorial.  She is hopeful the CBD will continue to address the issues that have been cropping up and will be able to empower local communities to solve problems by themselves.  The CBD, she said, is a venue in keeping civic spaces open and safe for everybody but it takes for everyone to create and maintain these.

Finally, Com. Karen urged everyone to look at the gains of what have been done in the past and carry on for better gains in the future.

Thereafter, the CHR regional directors from the Cordillera Administrative Region (Atty. Romel Daguimol), Region VI (Atty. Jonnie Dabuco) and Region XIII (Atty. Jerefe Bacang) presented the results of the island-wide conferences for Luzon, Visayas and Mindanao, respectively.  Noteworthy in the reports are the various CBD activities undertaken to address human rights issues and concerns, as well as the institutionalization of the CBD through the regional core groups comprising the CHR, PNP, AFP, CSOs & LGUs.  Further, it was a common suggestion to establish a referral and feedback system to facilitate reporting and monitoring of human rights incidents/cases.

ALG (Rene Clemente) gave a summary of the recommendations for consideration in future plans.

Messages of solidarity and commitment to the Community-based Dialogues were delivered by the partners – CHR (Atty. Gemma Parojinog), PNP HRAO (BGen. Vincent Calanoga), AFP CLOAC (BGen. Joel Alejandro Nacnac), PAHRA (Mr. Ellecer Carlos) and ALG (Atty. Sheila Formento).  They shared that the CBD project is a mutually beneficial initiative both for their respective institutions and stakeholders.  They emphasized its importance in providing venues for open, candid and respectful dialogue; common and better understanding of their roles and responsibilities in human rights promotion and protection; and building trust and confidence in one another for the good of society.

One of the highlights of the activity was the launch of the CBD project video documenting the “journey” taken by the partners and stakeholders in implementing the CBD since 2008 up to present.

In recognition of Com. Karen’s invaluable contributions to the CBD project since its inception in 2008, a video was shown as a tribute to her which was participated by her colleagues in the CHR, as well as past and present members of the PSC whom she is working/had worked with on the project.  Com. Karen’s term as CHR Commissioner will end on May 2022.

Finally, ALG National Coordinator, Atty. Sheila Formento gave the Closing Remarks.  She thanked the partners and participants for attending the virtual national conference.  She acknowledged what the project has accomplished for the past 13 years in close cooperation with the partners at the national and regional levels through the PSC and regional core groups, among others.  Atty. Formento noted the localization of the CBD from the regions to the provincial and municipal levels thereby reaching out to more sectors and communities on the ground including local government units, as well as deepening relationships between the security sector and civil society in pursuit of human rights promotion and protection.

The CBD project is a partnership of the Commission on Human Rights (CHR), Philippine National Police (PNP), Armed Forces of the Philippines (AFP), Alternative Law Groups (ALG), and Philippine Alliance of Human Rights Advocates (PAHRA), with support from the Hanns Seidel Foundation/Germany (HSF).